Away from home and missing your routine workout? Or do your kids need to burn off some energy? Not to worry, the Ottawa YMCA is a complete family destination. Our facilities include two gyms, an indoor swimming pool, two weight rooms, a cardio center, and a conference room. We offer many sports, adult fitness classes, pre-school, before and after school programs as well as summer day care programs. Prices: For Non-Members/Day Pass: $15 for Adults 18 and over, $8 for children, We also honor Nationwide membership for Facility use. Hours of Operation: M – F 5:30am – 8:00pm, Sat 7:00am – 4:00pm.

Before French explorers entered the Illinois Valley or white settlers sowed crops and built homes here, the valley was populated by Native American Indian tribes. They recognized the confluence of the Illinois and Fox rivers as an ideal trading center, and thousands settled in a grand village along what is now Dee Bennett Road between Ottawa and Utica.

These early residents relied on that great beast of the plains, the buffalo, as a source of food, clothing, medicine and other items necessary for their daily lives. Armed with bows and arrows, the hunters rounded up buffalo herds in canyons to make the animals easy targets. The ritual “buffalo run” has given the state park, Buffalo Rock, its name.

In the mural, a quartet of wooly bison jostle each other in their rush to escape, seeming ready to stampede into LaSalle Street traffic! Two hunters kneel and take aim, their sinewy arms drawing back the bowstrings and their eyes narrowing intensely as they focus on their targets. In the distance, the tawny grass of an Illinois Valley bluff stretches to the blue-gray horizon and the Illinois River.

Designed and painted by: E. Colin Williams and Murals by Jericho

In 1886, a young French glassblower named Victor Peltier opened his own company in Ottawa. Peltier Glass made opalescent glass, sheet glass, stained glass and glass marbles. In this mural, you can spot not only the innovative machinery that occupied the factory, such as the marble-making machine, but see some of the products that the factory made.

St. Patrick’s Church and Chicago’s Cultural Center represent some of Peltier’s clientele, as does the Ford Motor Co., which purchased Peltier glass for headlamps and shift knobs.

Louis Comfort Tiffany, whose lamps and products were much sought-after home decor, purchased colored glass from Peltier. Populating the mural are some of Peltier’s smallest customers (painters copied the faces of current Ottawa children) as they enjoy a 19th century pastime of shooting marbles. From Ottawa’s oldest factory, Peltier’s glass has traveled to all corners of the globe.

Open to the Public!

Unique to Central Illinois, Pine Hills golf course has been described as a Canyon Course complete with bluffs, valleys, hills and hundreds of trees. It is a challenge to both the beginner and the seasoned golfer and is recognized by many players as one of the finest 9-hole facilities in the country. Private and group golf lessons are available at Pine Hills which is located 1.5 miles south of Ottawa and 12 miles southeast of Starved Rock State Park. The Pine Hills Club House offers a friendly atmosphere and includes a Pro-Shop, large dining area with panoramic views of the Course, outdoor patio, a comfortable bar and can provide meeting space for up to 100 people. Starting in 2012, Pine Hills Golf Club will offer special event facilities with a capacity of up to 450.

The Radium Girls were factory workers who contracted radiation poisoning from painting watch dials with glow-in-the-dark paint. The women, who had been told the paint was harmless, ingested deadly amounts of radium by licking their paintbrushes to sharpen them.

The company started on the east coast in a New Jersey town. Five of the women challenged their employer in a case that established the right of individual workers who contract occupational diseases to sue their employers. After the settlement the company closed and moved its operation to Ottawa under a new name. A similar case would follow as employees fell ill.

The Radium Girls saga holds an important place in the history of both the field of health physics and the labor rights movement. The right of individual workers to sue for damages from corporations due to labor abuse was established as a result of the Radium Girls case. In the wake of the case, industrial safety standards were demonstrably enhanced for many decades.

The new Jersey case was settled in the fall of 1928, before the trial deliberated by the jury, and the settlement for each of the Radium Girls was $10, 000 ($135,349 in today’s terms) and a $600 per year annuity ($8,121 per term year in today’s terms) while they loved and all medical and legal expenses incurred would also be paid by the company.

The lawsuit and resulting publicity was a factor in the establishment of occupational disease labor law. Radium dial painters were instructed in proper safety precautions and provided with protective gear; in particular, they no longer shaped paint brushes by lip, and avoided ingesting or breathing the paint. Radium paint was still used in dials as late as the 1960’s, but there were no further injuries to dial painters. This served to highlight that the injuries suffered by the Radium Girls were completely preventable.

Our library has a large selection of children’s books, a Puppets “n” Stuff play center, and we host a number of family oriented events. Computers are available for both adults and children and we are a wifi hotspot.  Check out our website for more details at http://www.reddicklibrary.org

In 1919, women got the right to vote. A pivotal moment. “Revolution” overlooking the
confluence of the Fox and Illinois Rivers, is a tribute to Ottawa’s, and America’s tenacious women exploding into independence. Our ladies oversee the heart of Ottawa, remembering bustling speakeasies, hotels, and trolleys. With John Pugh’s Trompe L’ Oeil mural, we witness a revolution in time and culture. Two flappers perched on the ledge of our infamous Zeller Inn toast passersby. Luminous green radium gas oozes and swirls behind. “Poppy”, by ‘The Mother of American Modernism’, Georgia O’Keefe, epitomizes the feminine revolution. Rotating downward, peering at us through misty revolving windows are two heroic Radium Dial women. The first from New Jersey, then Ottawan Charlotte Purcell, both poisoned by radon. Charlotte with a handful of unswerving Ottawa Radium Dial women laid the foundation for today’s worker protection laws. Look closely and you will find hidden images within. 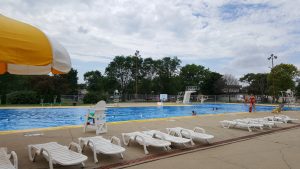 Take a break from the summer heat and cool off at Ottawa’s local pool! Enjoy fun water features such as a slide, umbrella fountains, and a wadding/baby pool. Open 6 days a week Monday thru Saturday, closed on Sundays.  Adult swim from 11 am  – 12 pm. 12pm– 6pm. Cost: $4 per person, 2 and under free. Concessions sold at pool. Available for rentals. (815) 433-4324

Take a leisurely stroll or bike ride along the Fox and Illinois Rivers on Ottawa’s beautiful Riverwalk. You’ll enjoy beautiful river and scenic views as the Riverwalk winds along the rivers and through some of Ottawa’s public parks and boat launches. Don’t forget to bring your disc golf or fishing gear, the Riverwalk passes by Ottawa’s Disc Golf course and many different fishing spots. 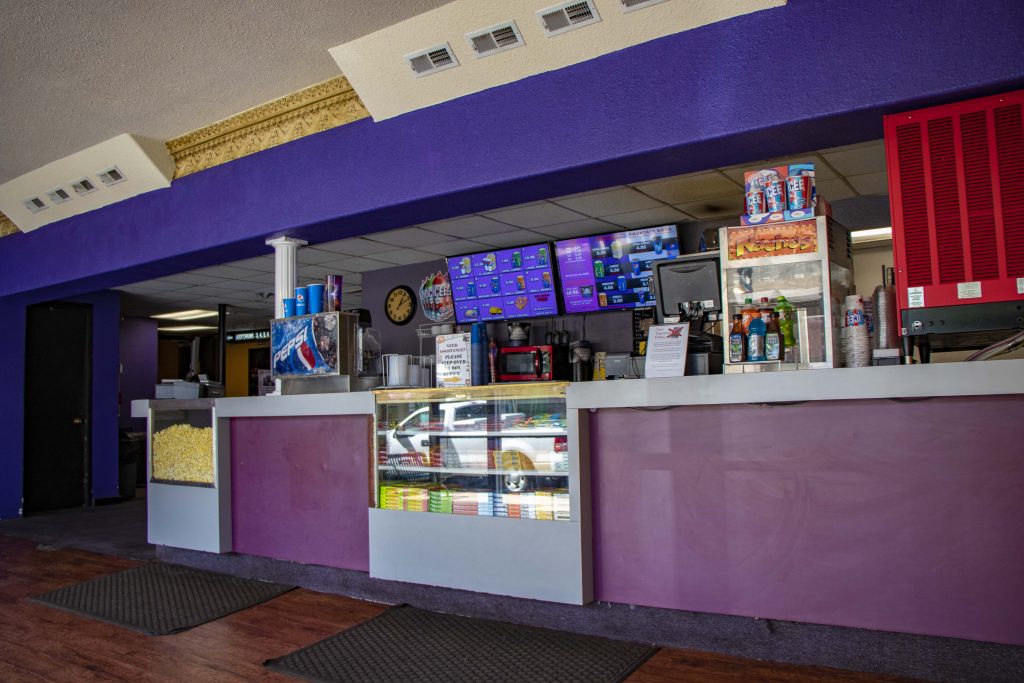 Great Movies at Great Prices.
Check out the Roxy Cinemas! Grab a bag of popcorn and catch the latest blockbuster movie!

Nestled on the West bank of the Fox River approximately 75 miles from Chicago lies the Skydive Chicago Airport, designed from the ground up to efficiently function as a skydiving training and recreation center. This 230-acre complex contains a large hangar that provides 15,000 square feet of shade and shelter adjoining 22,500 square feet of classrooms, common areas with satellite feed, recreation centers with pool tables and video games, a pro shop, video department and deli that serves food and alcoholic beverages. At night, enjoy movies or a club-type party in our two level auditorium theatre, featuring a 30,000-watt sound and projection system. Just to the East is a full hook-up campground featuring a large pond that¹s surrounded by sprawling decks and highlighted by a serene island. On the North shore is a beautiful white sand beach that adjoins a large pavilion with showers, laundry facilities and volleyball court. This entire complex is surrounded by acres of pastures that gently roll to the banks of the Fox River. Canoeing, hiking/biking trails and horseback riding are also available on the property.

Starved Rock Hot Glass is a glassblowing studio and art gallery that specializes in original hand-blown art glass and jewelry. Group tours and glass blowing demonstrations may be arranged by appointment. Lessons are available. Hours: Tues-Fri 10am – 6pm & Sat 11am – 5pm.

Designed and painted by: Joshua Winer

Ottawans regularly marched in parades, cheered for them or stood transfixed along the route as the city hosted this most universal of celebrations. Parades brought people together, and brought them to a vibrant and bustling downtown.

Artist Joshua Winer envisioned a parade as a means of populating Ottawa’s unique architectural landscape. He wove prominent citizens and familiar faces in to the painting as marchers or bystanders. Mayor Phil Bailey doffs his top hat, and State’s Attorney Harland Warren raises his hand in a wave. Warren gained prominence during the area’s most
notorious murder case, the Starved Rock Murders.

Along the route are Ottawa residents who, then and now, have enriched our community and given Ottawa its distinctive character. The muralist captured a pivotal decade which was defined by a mixture of complacency and unrest. Ottawa, like America, emerged from the decade stronger, wiser and ready to sprint forward into the 21st century!