Ticket holders to this event are invited to tour the following:

The Cora J. Pope Home – 116 West Prospect Avenue – Ottawa, IL Milton and Cora Justine Pope built this lovely 18 room Victorian home on the south bluff of Ottawa in 1902. Cora oversaw much of the construction work herself. The couple did not have children, but each had an abiding interest in the community. When Cora died in 1942, the Sixth item in her Last Will and Testament bequeathed her home on Prospect Avenue, together with all the household furniture, furnishings, goods and equipment, etc., to wit: “To establish and perpetually maintain a home for the comfortable support and maintenance of aged, respectable, indigent women, who may be incapable of self-support, but not including any who may be paupers, the said home to be always known and named “THE CORA J. POPE HOME.” The home is presently being renovated to serve as a Bed and Breakfast. Current owners are Larry and Ellyn Mitchell.

The Hossack House – 210 West Prospect Avenue – Ottawa, IL In the early to mid 1850’s, noted abolitionist John Hossack engaged the services of Architect Sylvanus Grow to design his new home, which was to be built on the south bluff overlooking the Illinois River in Ottawa, IL. The home was completed ca. 1854-1855. It was rumored to be a stop on the Underground Railroad. That beautiful home has graced that spot on Ottawa’s south bluff and has been a landmark to generations of Ottawans. In the 1920’s and 1930’s, the Federal Government sent staff here to photograph it, and do historical research on it. In 1972, it was placed on the National Register of Historic Places. And, in late February 2017, a devastating tornado brutally attacked it and damaged it severely, ripping off most of its roof and leaving it open to the winds and heavy rain that followed in the wake of the tornado. Homeowners Rich and Kyla Mennecke went to work immediately and began the home’s restoration. They have done an outstanding job and the home is once again sound and secure.

The W. H. Jacobs Home – 228 West Prospect Avenue – Ottawa, IL This lovely home at the west end of Prospect Avenue was built ca. 1913 for Mr. & Mrs. William H. Jacobs. Mrs. Jacobs (Elizabeth) was a daughter of Mr. & Mrs. Joseph E. Porter, whose home is immediately east of this home. William was from Amboy, IL and worked for his father-in-law for many years. The couple’s marriage in February 1890 was quite a social event in Ottawa. For many years this was the home of the Dr. and Mrs. John J. Eldridge and family. Current owners are Mr. and Mrs. John Hoagland.

The George Hull Home – 325 Clay Street – Ottawa, IL The 1902-03 Ottawa City Directory lists this as the home of Mr. and Mrs. George (Alice) Hull and their daughter Charlotte, who was a teacher. By 1907-08, the Edw. C. (Lilla) Walters family were in residence. Edw. was a general agent for the Chicago, Rock Island and Peoria railroad. The family of Edward R (Amelia) Claus was here for a long time – 1914-1951. He was the Secretary/Treasurer for the wellknown King and Hamilton Company of Ottawa. In the 1980s, Gerald and Gail Castelli purchased the home. Gail is remembered for her Glamorous Nails by Gail nail salon operated out of this home. Mr. Castelli is the owner of this stately house. The home is currently on the market and available for purchase.

The Ottawa Historical and Scouting Heritage Museum – 1100 Canal Street – Ottawa, IL. The museum is open free of charge to attendees of the Historic House Walk and will feature a special photographic exhibit of the tornado damage to the Hossack House, the renovation process and additional information on the other homes. Ticket holders will be served refreshments at the museum as well. 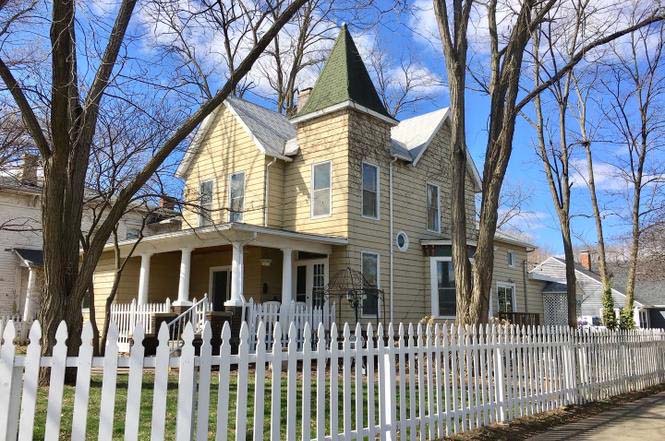