My Favorite Year with Walt Willey 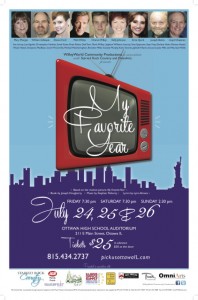 A delightful comedy based on the film of the same name, My Favorite year is based on the Golden Age of television and if you’ve seen the movie, you know what a comedy riot this show is! With an All Star cast and featuring both my son, Chance Willey, and daughter, Kit Willey.

There are many trails in and around Ottawa. They ...

Beautiful view from Buffalo Rock looking over the...

The downtown sidewalk plantings are so lush and ...

President Lincoln has been making his rounds in ...